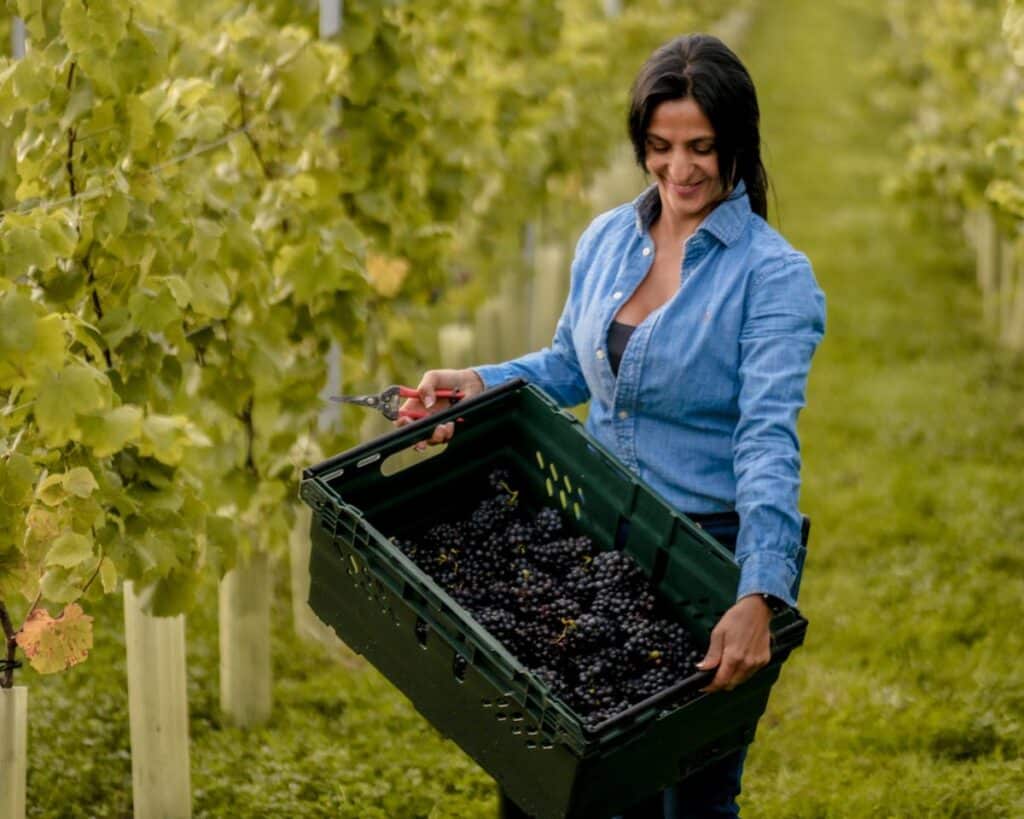 Described by Robinson  as a finicky vine, in Champagne it is a key blend component of sparkling wine with light pressing of its just ripe berries, with more 20% more hectares planted than in Burgundy.

In England 24.7% of all grapevines  are now Pinot Noir . Pinot Noir is especially clonally diverse with 18 clones registered  in Champagne and 800 hundred in existence but unregistered in France alone. This diversity stems from a genetic instability, with more clones than any other grape variety .

Sparkling wine such as Oastbrook’s Sparkling Rose demands unique qualities in grapes compared with table wine counterparts with relatively higher acidity and lower soluble sugar as well as a balanced and specific phenolic profile. There are clear implications of clonal selection for adequate yield and sugar, acid for sparkling wine, although impacts on fruit quality have been largely ignored .

Robinson noted that Pinot Noir does particularly well in temperate climes but it is early budding and thus susceptible to spring frosts and early ripening, although it will shoot from secondary buds it is best planted on frost free sites with good frost. There remain notable differences  in growing degree Days (GDD): Kent shows a GDD of 85% of Champagne . This leads to a potential expression of higher acidity and lower natural sugar in English sparkling wines.

Yields vary significantly across regions with historical average yields in Champagne 2000 -2013 being more than five times that in the UK.

Pinot Noir is grown on a variety of soils in England. The Kimmeridgian soils of Aube, where Pinot thrives on calcerous-clay soils most closely resemble the Kimmeridgian outcrops in a line through Dorset, Wiltshire, Oxfordshire through to Northern Norfolk, Lincolnshire and Yorkshire . Pinot Noir is grown on Chalk ridges in Kent, Sussex and Hampshire, clay, silty, sandy soils of the Weald and combinations of soil types throughout the country.

Pinot Noir is susceptible to Botrytis, downy and powdery mildew and requires good management to keep it healthy through site selection, vineyard row design, and canopy management, to allow good airflow and reduced humidity build up.

Kemp , states Pinot noir clones from Champagne have higher yields and Burgundy clones have smaller bunches, higher sugars and lower yields. According to Skelton,  there are four types of Pinot Clones but not all are appropriate for sparkling wines.

Still wine producers may favour so called Pinot Fin varieties, which are lower yielding clones with compact bunches and small berries higher in tannin and anthocyanins. The tighter bunches make such grapes more prone to Botrytis and the lower yields are less attractive for the production of sparkling wines.

Clones with looser bunches, often with larger berries and higher yields are attractive for growers due to their higher Botytis resistance but according to Skelton,  these so called Mariafeld or Wadenswill clones and not ideal for sparkling wines.

Clones with smaller berries from Geisenheim and Freiberg tend to have large bunches and high yields and better suited for still wine in the German style .

Finally there are upright clonal varieties Pinot Droit, which  less Botrytis prone than Pinot Fin. They can be later to ripen.

Any choice of clone needs to be made in combination with choice of rootstock. Fercal and 41B are favoured for chalk soils to avoid Chlorosis. Where other rootsocks have been used such as SO4 remedial treatment such as Ferleaf and Fersoil (Skelton, 2014) may be necessary. Skelton, (2014) recommends that on more fertile soils not at risk from Chlorosis it is preferable to use 101-14, 3309C and 420A, which are low vigour rootstocks to mitigate the vigour of Pinot Noir.

On the clay soils SO4 produced 34% larger yields than Gravsec and the pruning weight was inversely related to yields. 101-14M produced higher yields than 3309C. Gravasec was significantly more vigorous than other rootstocks in 2014/15 with SO4,101-14M  and 3309C least vigorous in different years.SO4 showed the highest yield/pruning weight ratio and Gravasec the lowest. SO4 showed larger numbers of berries per cluster and the clusters were the heaviest.. These variable results suggest diversity of rootstocks should be preferred.

The use of Fercal and 41B on chalk soils is borne out by the choices made by Chapel Down at Kits Coty, Gusbourne in West Sussex, Exton Park in Hampshire and Westwell in Kent, where they all use a combination of the two. Rathfinny in Sussex have preferred Fercal as it is deeper rooting and promotes early ripening. In contrast Gusbourne uses a combination of S04 and 3309 on its clay and sandy, clay loam site in Kent as does New House Farm in Bodiam. Exton have had less success with a small batch of SO4 planted on chalk but they have successfully used an iron chelate machine injection system to mitigate this.

McKenzie’s,  study of multiple rootstocks and varietals on chalk soil in Southern England noted the following: 386 on Fercal rootstock led to significantly later veraison and not unexpectedly Champagne varieties showed higher yields than Burgundy clones. He found that the TA for Champagne clones 521 on SO4 and 870 on 41B were lowest and highest for FR 1604 on SO4. Burgundy clone 115 on SO4 had the highest sugar level and a darkest colour. 292 (A Jura Clone) on 41B was the highest yielding of all.

Kemp , compared of clones 115, 386,459, 667 and 777 and a further final analysis of 459 and 386 in Ontario. At similar planting densities to the UK, 459  and 386 showed significantly higher yields than  than the Burgundy clones mainly due to greater number of clusters per vine and higher berry weight.

Most English producers are sticking to classic Champagne clones but there is also experimentation with mixed Geisenheim clones which offer an interesting alternative. Chapel Down have planted 927,828 and 386 at their Kit’s Coty site but Richard Lewis, maintains that the Geisenheim pinot clones give higher yields with greater Botrytis resistance because of their open bunches but the French varietals taste better.

In conclusion – it remains a period of experimentation and without industry wide controlled analysis individual growers are running their own trials to determine what works best. In some cases, such as at Chapel Down growers are beginning to conduct more scientific trials of rootstock yields starting with detailed soil analysis.  In many cases they are hedging their bets through diversification. There appears to be a degree of consistency on rootstocks for chalk soils with 41B and Fercal dominating  and 3309 and  SO4 are popular for other soils.

The range of clones remains wide with a balance being struck between higher yields which favour the clones such as 20-13 and classical taste profiles which favour the Champagne varieties. Using 20-13 to maintain yields and fruit quality as part of a blend in our damper humid conditions makes sense and it will be interesting to see how the other Geisenheim clones resolve at Rathfinny.  Pinot Noir may yet surprise us. As the most genetically unstable grape we may find that Pinot may develop its own English hybrid if we give it half a chance. Maybe clone 234 in honour of St George.

McKenzie Graham, S., 2012. Summary of extracts from the project “Pinot noir clonal variation in South East England in viticulture and in sparkling winemaking”, [online], Available at https://kenziewine.files.wordpress.com/2012/06/pinotnoirclones-english-grapepress-smg-v5-no-name.pdf [Accessed 13 may 2018]

Speechly, W.,1790. A treatise on the culture of the vine: Exhibiting new and advantageous methods of propagating, cultivating, and training that plant, so as to render it abundantly fruitful, together with new hints on the formation of vineyards in England. York: Peacock

West, I.,2013 . Distribution of the outcrop and subcrop of the Kimmeridge Clay in England,  Proceedings of the Geologists association, vol 123, pp 64-67